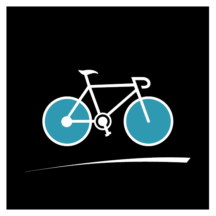 It’s rides like this that are what cycling in Catalunya is all about.

This is a gem of a ride with three clear sections: the first 30km are a good warm up from the coast, onto wide valley roads over gently rising terrain. The middle 50km are dreamlike: a loop from Alforja on narrow roads that take in the dramatic mountain scenery of the Serra de la Mussara. The last 30 km offer a fast return back to the coast.

While the first and last 30 kilometres are good, the Alforja loop is outstanding and what makes this ride memorable. 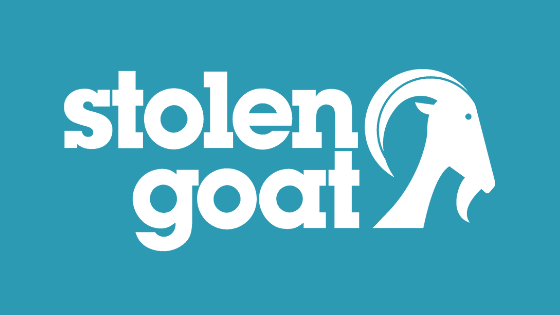 The whole of the 50km loop from Alforja was brilliant - quiet, picturesque and challenging while not being crazily demanding.

If we had to pick a highlight from this, it would be the 5 kilometres after you turn left onto the TV-7092 after La Mussara. The views over the plains were incredible and this rolling road is a joy to ride. 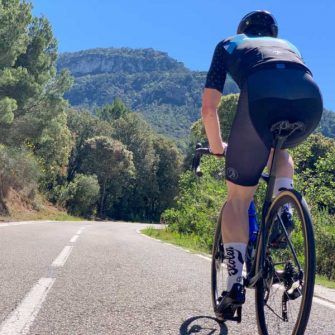 Climbing to the La Mussara summit 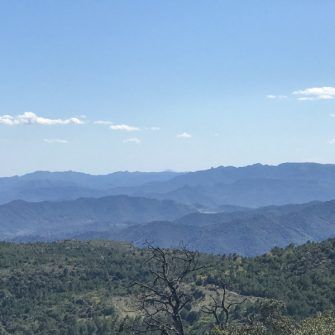 Unspoilt scenery as far as the eye can see 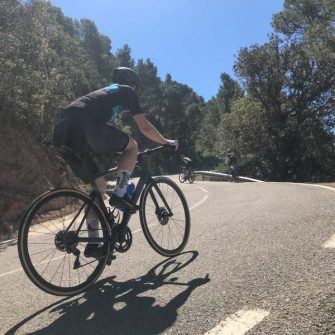 It’s a flat 10km through the urban area of Salou. The road rises as you hit Cambrils and turn inland and the next 20km are on a gently upward sloping wide, but not overly busy, main road towards the hills. You climb up through the winding, leafy streets of Ruidoms and 7km later spot the pretty houses and tall church tower of Alforja to your left. 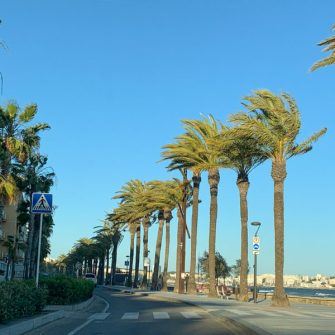 Road along the seafront at Cambrils 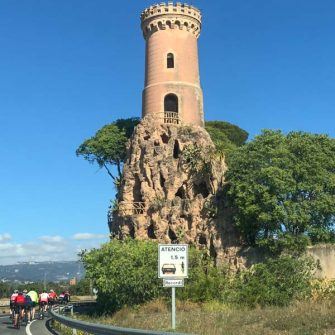 Riding out of town from Cambrils near Montbrio del Camp

View to Alforja from the road

The loop from Alforja is what this ride is all about. It’s pure class.

At Alforja you turn off the C-242 onto the TP-7013 and it feels like you’re leaving urban development behind you and the adventure is really beginning, with green rolling hills all around.

The first 6km east of Alforja have a few minor lumps, including a sign indicating a 9% drop down into Vilaplana, which is where the first climb begins in earnest. You take the third exit of the roundabout (signposted Prades 29km) and climb up above Vilaplana and up into the hills on the T-704.

It’s a fabulous winding, 10km climb, with 6% average gradients with a carpet of green trees before you, reaching up to the rugged red rocks of the Mussara above you. As you reach the switchback section at about 5km into the climb (43km into the ride), the views open out and you get that feeling of being on top of the world.

Above you you can see some communications masts, it’s just a question of keeping the legs spinning until you reach the top - but on this friendly climb (average gradient 6%, maximum 8%) it’s not too much of a struggle. There’s no summit sign or marker, just an open flat road and a couple of kilometres of easy, twisting descent, before a little ramp up to where you turn left onto the TV-7092. 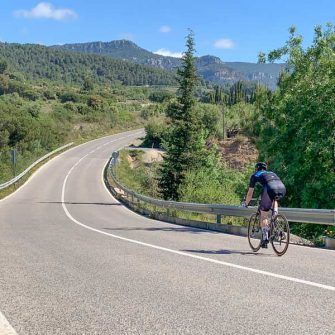 Leaving Alforja and riding towards Vilaplana

Near the start of the La Mussara climb 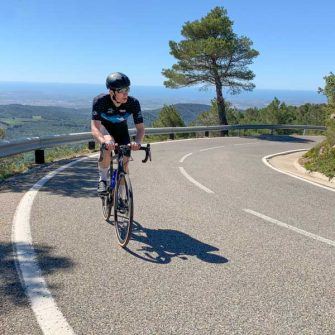 Near the summit of La Mussara

The next 5 kilometres are rolling, but stunning, as you pedal along a sort of plateau. It feels like a ridge road, with far-reaching views opening up on the left towards the coast.

The road then descends, mainly through forest. There’s a sharp right turn off half way down the climb and then you descend into Arboli a tiny little hamlet with steep streets where you weave through the buildings on ancient roads.

There’s a little climb after Arboli and then you’re on a high ridge road with the reservoir Siurana appearing on your right. It’s quite a wow moment as the reservoir comes into sight. Red cliffs soar above the reservoir and there are stunning rock formations. From here it’s a four kilometre descent, around the reservoir. Take great care on the road - we found it very narrow and very gravelly.

There’s a T junction at the bottom, which meets another road to the reservoir, before a second T junction that brings you onto the more major C-242. Reaching the C-242 felt a bit like being back in civilisation again - not that there are any/many buildings, rather that the light traffic we encountered here made us realise how ridiculously quiet the rest of the loop had been!

This is the start of the climb up to the final big hill of the day - the Coll d’Alforja, which will take you to 641 metres. Luckily, this twisting, wooded climb is also pretty gradual - 6 kilometres at an average 3-4%. From the top of the pass it’s a final big descent down to Alforja, with superb views out across the coastal plains to sea.

From Alforja, you’re back onto pretty much the same route that brought you the 30 km inland this morning - except you’ve got the slight gradient with you, so you can fly back to the coast. What a great day! 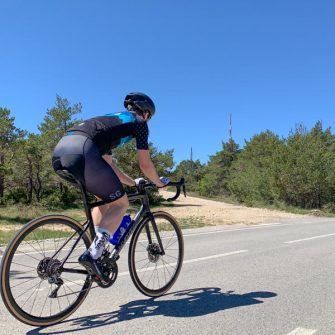 At the summit of La Mussara

Spectacular views along the "ridge road" after La Mussara summit 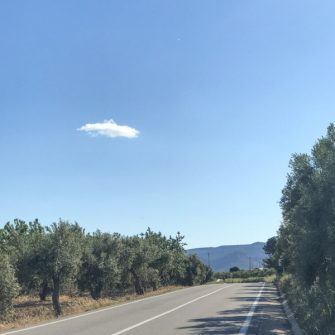 Road back to the coast from Alforja

Once you leave Vilaplana, expect to be self-sufficient for the next 25 km until Arboli, and really, given this is such a tiny hamlet, until you’re back in Alforja. There’s almost no opportunity for refuelling during the 50 km between Vilaplana and Alforja. This is remote Spain, which is brilliant fun - just don’t expect fuelling stops and help on hand!

We stayed at the Hotel Estival Eldorado just outside Cambrils. You can find our review of the hotel and information on what Cambrils and Salou are like in our Ultimate guide to cycling Costa Daurada, here.

Read our tips for cycling the Costa Daurada before you set out.

The Alforja loop is extremely rural - there’s almost nothing in the way of towns/villages/petrol stations for 50km. Expect to be self-sufficient.

Take care on the concrete section of road near the Siurana reservoir. We had a few dodgy moments on the gravelly descent there.

At the top of the Mussara climb, at about kilometre 51 of the ride, there’s a turning down to La Mussara. We didn’t get a chance to take a look, but we’ve heard La Mussara is one of the area’s abandoned towns with an impressive ruined church and a romantic atmosphere.

La Mussara (which used to be known as Coll de Les Llebres) is used by people that want to complete the everesting challenge. To complete it here you have to go up and down 14 times (8,498m) plus a final ascent of 350m altitude of the 5.4km to the top. This gives a total distance of 298 km in 20 hours. More info on everesting, here.

Cycling in Catalunya: have you been?

Let us know your favourite routes in the comments below!

Don't miss our other routes for the Costa Daurada region - links below or click on these: Priorat/Montsant, ​Poblet/Mont Blanc, El Vendrell/Santa Creus.

We're proud to be brand ambassadors for Stolen Goat.

Priorat and Montsant regions, Costa Daurada
This route takes you through some of the best cycling in Spain: the Costa Daurada's Priorat and Montsant regions. You'll find stunning mountain and vineyard scenery on quiet roads. This guide tells you what to expect including GPX, map and tips.
Read more
Mussara and Siurana loop, Costa Daurada
Our guide to a truly excellent Catalunya cycling route that takes you into the Mussara mountains of the Costa Daurada. You'll find a GPX download, route tips, where to stay and more.
Read more
El Vendrell and Santes Creus monastery loop, Costa Daurada
An outstanding Catalonia cycling ride: a loop from El Vendrell taking in the stunning Santes Creus monastery and wonderful countryside. Read on for GPX, map and more!
Read more
Montblanc and the Prades mountains, Costa Daurada
A route that takes in UNESCO Poblet monastery, medieval Montblanc and the beautiful Poblet mountains. A cracker of a ride with some of the best road cycling in Spain.
Read more

x
We use cookies to improve your experience on our site. Find out more here.
<-- -->