This ride is awesome due to the loop from Llagostera. It epitomises what cycling Costa Brava’s coastline is all about. It's got long but gradual ascents (the one to Sant Grau is unforgettable - more details below), sweeping descents, incredible panoramas and one of the best coast roads we've ever ridden.

If you’ve lost your love for cycling, do this ride: it’s impossible not to feel happy. 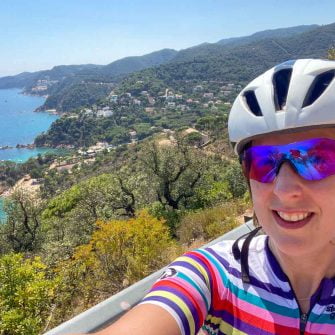 Cracking views along the coast

The turquoise sea to your right hand side

A dreamy, rollercoaster of a road

The first 25km to Llagostera are on quiet, country lanes through pretty hamlets and dense copses.

Note: instead of taking our lesser known route, many cyclists choose to ride the C-65 out of Girona to Cassà de la Selva, before cutting onto the GIV-6741 towards Caldes de Malavella. We much prefer our route as it avoids the C-65, which is one of the main roads out of Girona to the south and is not particularly pleasant.

View to the sea Costa Brava 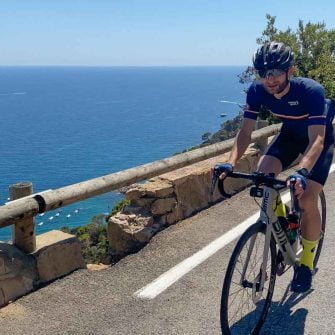 Big smiles on this incredible road 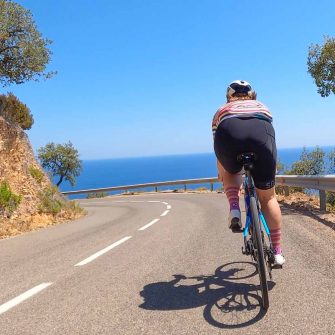 A beautiful descent to the sea

This is where the real fun begins. It’s an easy climb out of Llagostera on a road that takes you up into the mountains. You’re surrounded by woodland and, while the road has a carriageway in either direction, we saw more cyclists than cars when we rode it. It’s a gorgeous, looping descent downwards and it’s easy to build up some cheek-rippling speed, if that’s your thing! 10km later you’re deposited at the glistening shoreline in Tossa de Mar.

Tossa de Mar is a memorable place with an exceptional fortified medieval town - the only one on the Catalan coast and listed as a historic monument in 1931. It would make a good spot to meet any non-cyclists as there is plenty for them to explore including the old town itself and several beaches. It’s also a great place for coffee or lunch. Pick from beach cafés, canopy-covered restaurants or somewhere in the old town (5 minutes by foot).

The 10 kilometres from Tossa de Mar to the turn off for Sant Grau are cycling bliss. You’re on an undulating road that snakes its way along the rocky coastline, with views from every bend. The road wiggles out in front of you and down below are crystal clear bays and sandy beaches.

Once you turn off for Sant Grau, you’re on a narrow, singletrack road that winds 6.3 km upwards, accumulating 375 m in height. It’s never too painful with gradients averaging 5% (though watch out for the half kilometre just before the top where gradients are just into double digits). All the way up you get panoramic views over the wooded mountains and down to the sea. It feels very secluded and peaceful. The only other person we met was a Cannondale-Drapac pro rider who went past so quickly, we couldn’t even identify him!

Just before the summit is Sant Grau monastery. It’s built in neo-Romanesque style, and its imposing, grey walls stand 360m above sea level in the heart of the mountains. Head through the cavernous, arched doorway, and you find a pleasant courtyard with a little bar/restaurant. It is a memorable place for a quick drink or snack

Then it’s time to enjoy the glorious 10km descent down to Llagostera.

We recommend returning to Girona the way you came - see 1. above. Village on the quiet road back to Girona

Your best bets are:

Hotel Nord 1901 was our home for our trip to Girona. It was a great place to stay, and this ride is easily accessible from there.

For more suggestions, take a look at the accommodation section of our ultimate guide to Girona for cyclists.

There are plenty of different route variations from Llagostera. For example, if you want a longer ride and to take in more of the epic coastline, instead of cutting inland up to Sant Grau, you could continue to Sant Feliu de Guíxols before winding your way back inland on the GIV-6621, GI-662, GIV-6613 and GIV-6612.

Take particular care when descending - it’s twisty, and there is often dirt and debris on the road.

The sixth stage of the Tour de France visited the Costa Brava coast road in 2009. The route included the stretch between Tossa de Mar and Sant Feliu de Guíxols.

You may notice that some of the trees have had their bark stripped towards their base. That’s because they are cork trees - the area is one of the biggest cork producers in the world.

Read our tips for cycling in Girona before you set out.

We're proud to be brand partners with Stolen Goat.

10 easy cycling routes in/around Girona + Costa Brava
Girona cycling experts share their favourite easy cycling routes in/around Girona.
Read more
Girona bike tours: which to choose?
Handy information on Girona bike tours: who offers what for road cyclists.
Read more
La Fábrica Girona (and friends): Girona’s best cafés/coffee shops
Discover three of Girona's best cafés/coffee shops: La Fábrica Girona, Espresso Mafia and Federal.
Read more
Girona’s pro cycling kit boutique: www.procycling
outlet.com
Q&A with owners of procyclingoutlet.com sharing the inside story on how this pro cycling kit boutique started.
Read more
Cycling north of Girona, Catalunya: Q&A with Adrià Moreno
Local cyclist Adria Moreno knows a thing or two about cycling in Catalunya. Here he shares the best rides around Girona and the La Garrotxa region of Catalunya.
Read more
5 unmissable things to do in Girona, Spain (when you’re not cycling)
We reveal the best things to do in Girona when you're not on your bike. From restaurants to massages we let you know what to do!
Read more

The contents of this website is provided for general information purposes only. It is not intended to amount to advice and you should not rely on it. We make no representations, warranties or guarantees, whether express or implied, that the content on our website is accurate, complete or up to date. If you use any information or content on this website, download from, or otherwise obtain content or services through our site, it is entirely at your own discretion and risk. Epic Road Rides disclaims all liability and responsibility arising from any reliance placed on the information and content on this website. Find out more here.

I use cookies on my website, to help me see which articles are most popular and to allow other functionality and analytics. This helps me run the site and know what to write next! There's more info in our Privacy Policy. If you're okay with this, please click Accept All (if not, click the Cookie Settings). Either way, you can change your settings at any time. Thanks! Clare
Cookie SettingsAccept All
Manage consent

This website uses cookies to improve your experience while you navigate through the website. Out of these, the cookies that are categorized as necessary are stored on your browser as they are essential for the working of basic functionalities of the website. We also use third-party cookies that help us analyze and understand how you use this website. These cookies will be stored in your browser only with your consent. You also have the option to opt-out of these cookies. But opting out of some of these cookies may affect your browsing experience.
Necessary Always Enabled
Necessary cookies are absolutely essential for the website to function properly. These cookies ensure basic functionalities and security features of the website, anonymously.
Functional
Functional cookies help to perform certain functionalities like sharing the content of the website on social media platforms, collect feedbacks, and other third-party features.
Performance
Performance cookies are used to understand and analyze the key performance indexes of the website which helps in delivering a better user experience for the visitors.
Analytics
Analytical cookies are used to understand how visitors interact with the website. These cookies help provide information on metrics the number of visitors, bounce rate, traffic source, etc.
Advertisement
Advertisement cookies are used to provide visitors with relevant ads and marketing campaigns. These cookies track visitors across websites and collect information to provide customized ads.
Others
Other uncategorized cookies are those that are being analyzed and have not been classified into a category as yet.
SAVE & ACCEPT